5pm tonight Carshena had 2 Bucks and 1 Doe.  The first buck was 9.3# and Hailey helped a little with straightening the legs and a little tension but she pushed like a trooper.  #2 was another buck.  As he began to show himself, he looked funny…..it’s a tail……..oh no!!  He’s breach…..and bum first too.

No problem for Hailey, she just hooked a finger around a back leg, got them both, and gave a nice smooth pull.  6.6# and not breathing……oh no!!  Hailey quickly cleared his mouth, gave him a few smacks to the body and…..Eek…he made a noise and flinched a little…..woo hoo……he’s still alive.  A couple more smacks and some more clearing of the mouth…….Carshena was also sticking her nose in to help clean him up and baaaing at him.  Well that did it he had to breathe then…….whew…..that was close.  He probably lost a little oxygen in that few seconds it took for all that to happen so we will be keeping an eye on him for a couple of weeks.  Right after that here comes another baby.  Oh maybe we get a girl after all (Carshena’s dam always throws twins).  OH no!!! …….another breach baby ….but Hailey again grabs the legs (legs first this time) and gave a gentle but quick pull and out comes a beautiful 6.68# baby doeling ……Yeah!! and she is breathing fine no problems to work out.

Wow Triplets, GOOD JOB CARSHENA, she made it look easy to birth 23# worth of kids.  Just for that we gave her a big bowl of Molasses water, about a gallon, which she readily sucked down, they always do.  It’s good for energy and Iron.  She looks like she should milk very well for a second freshener.  She has passed her State tests to be on our milking string also.  So if we can sell a couple of buck kids we’ll have some milk to sell soon.  She gave us about 3+# of Colostrum.  Big buckling and doeling drank fine, the little second buck we had to help drink to get him some.  Stay tuned for more on Carshena’s milk production.  Both bucks are up for sale, no papers.  $75 for the big guy and $40 for the little guy if picked up within the first couple of weeks.  Hopefully this means Essencial is throwing multiples 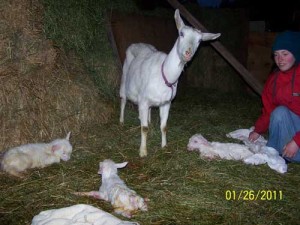 Wow Carshena you lost some weight

This entry was posted in 2011 Kiddings, General Information, Goat Care. Bookmark the permalink.

One Response to Carshena has TRIPLETS